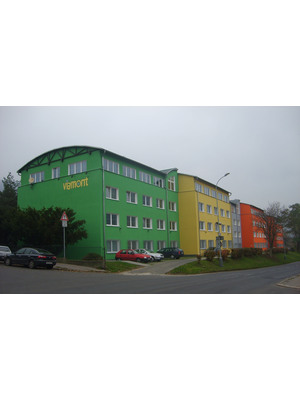 These are two existing three-storey buildings, which form part of a block of six administration buildings built at the end of the 70th of the last century for the needs of the executive unit of the then Czechoslovak State Railways in Železničářská Street in Usti nad Labem - Střekov.
Two of these objects serve as an administrative building of VIAMONT a.s. company and the remaining four as an administrative building CD, as - Management of transport routes.

At once with the construction of roof superstructures was worked out reconstruction of the existing face of building, which includes the complete replacement of existing windows, cancellation loggia walls and their replacement with new plastic windows. Wall coat on roof superstructure is brick up of porous concrete blocks with additional insulation. Windows are designed plastic, openable and tilting. Roofing is designed from two belts with bituminous coating.

Also new is solution of wheelchair access to the building, construction of new overhead bridges for pedestrians and persons with reduced orientation and movement.